This installment is about Karl Mark Pall.  Karl considers himself a fortunate man.  He has a nice family, he uses his hobby in his profession, and he was lucky enough to be born in Detroit in 1936, on the night of the big fight between Joe Louis and Max Schmeling for the World Title.  Joe Louis won the title that evening.

Karl started collecting coins like most children do, when he was given coins.  Karl comes from a European family, and one of the holiday traditions was to bring coins and dollars for the children. Those who had it would bring gold, others would bring silver.  The shinier and newer the silver was, the better.  Children would put these gifts away in a drawer until much later.

When Karl was five or six years old, he started collecting National Geographic books, rather than coins.  His uncle Nicholas was his inspiration for 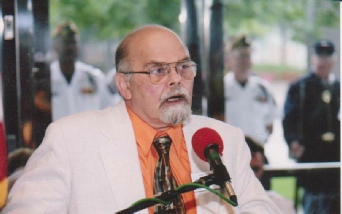 collecting these books.  Nicholas came from the Ukraine, and did various jobs to earn a living. Karl says that his real mentor was his father, John Pall, whose real name was E’van Pehulak, who came from what was then the border between the Ukraine and Austria.  He was a tough immigrant kid when he first came to Canada, and then to the U.S.  John lived on an Indian reservation, and later worked with a carnival in Minnesota, traveling the entire U.S.  Karl said that his father was the rope walker and the carnival’s wrestler, taking all comers for a cash prize.  In 6 years he lost only twice...   He later became an electrician and a plumber in Detroit, where he met his future bride, Karl’s mother.  She was from Germany.  Karl was their only son.  He learned a lot from his father, in various aspects of his life and work history. Karl adds that he learned from both Papa and Mama about work and ethics.

Karl has given away books to libraries, and coins to children.  He believes that this is the way to pass on the interest and excitement to others.  He has received numerous numismatic awards, including the Irving Moskowitz Award for Best of Show on the topic of Governor Louis Cass at MSNS, which he was very honored to receive.  One of the things that was the most meaningful to him was to be presented with the Teacher of the Year Award in History at Wayne State University on the 300th anniversary of the City of Detroit.  He is now an Adjunct Professor at Macomb College, where he teaches a class on obsolete money.  It is called Money, Money, Money--the History of Money.

Karl has given some classes to coin clubs.  I had the opportunity to attend one such class that he presented to the Livingston Coin Club, on the topic of obsolete paper money.  I found the class to be very interesting, informative and entertaining.  I learned a lot about obsolete paper money, as well as the Michigan history behind it.

Karl says he has never found any outstanding coins in his pocket, but he has found books signed by famous people.  He collects obsolete paper money, for himself, and for his son, John.  He has accumulated a great collection of rare notes.  He has an eye for finding the elusive notes.   According to Karl, sometimes you pay too much for a note, but overall the value increases 25% every two years.

He is proud that his mentors have selected him as President of the Paper Money Collectors of Michigan.  To collectors, young and old, Karl says, “Follow your heart.  Your heart will tell you sometimes better than the logical things your mind will tell you.  There could be an occasion when you see something, and the person that you’re going to purchase it from may want a little more than you’re willing to pay.  If you want it, continue with your negotiations, but get it.  I’ve heard too many stories...[from people saying they] ‘should have.’  Would’ve could’ve should’ve is the worst thing that can happen to a collector.