Albion, Michigan is a community of 9,000 persons located along Interstate-94, 100 miles west of Detroit. One of Albion’s major 20th century employers, the Albion Malleable Iron Company, once issued tokens that had a rather interesting purpose which we will expound upon here. The Albion Malleable Iron Company was founded in 1888, and originally produced agricultural implement parts. By World War I, the company had switched to automotive castings. It recruited several hundred persons from southern U.S. states, as well as Eastern Europeans seeking a new life in America to work at the plant. The Malleable was merged in 1969 with the Hayes Corporation in nearby Jackson to become the Hayes-Albion Corporation, and today is known as a division of Harvard Industries. The company still produces automotive castings today, and is located at 601 N. Albion St. in Albion. 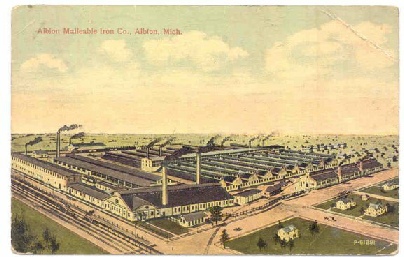 The Albion Malleable Iron Company, as depicted on this early 20th century postcard.

During the Great Depression of the 1930s, certain workers at the Malleable would receive aluminum tokens as evidence of their piece-rate for the day. They were called “chips” by the workers. This was in the days before hand counters were installed. A person was chosen to hand out the chips each day, which he received from the company office. They were turned in at the end of the shift by each worker who was paid according to how many chips he had collected for his work. A worker would generally earn about $3.00 a day for 10 hours of work.

The “chip” system was used primarily by men who were temporarily moved from one department job to another to finish out the day. They usually came from the grinding department. Other workers were on a piece-rate system, such as the molders whose work was recorded on paper by the foreman. The chips were used until 1937, when the long process of automation began and the molten iron came in buckets on a conveyer belt along with the sand molds. There are five different known chip designs.

The first group of men who received chips were the “bowl pushers.” These men collected the hot molten iron from the furnace in large bowls. The worker would fill his bowl from the spout coming out of the furnace. One bowl was similar to a very large bucket, and would contain enough molten iron to fill three individual ladles. Each time a “bowl pusher” poured his hot iron into a ladle, he would be given a chip that had a value ranging from 3¢ to 5¢. 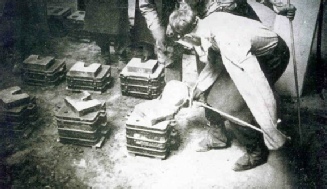 A worker demonstrates the pouring of a ladle of iron into a mold. The handle is called the shank.

A large “bowl” or bucket of molten iron is poured into a pouring ladle.

There are three known designs used on chips given to “bowl pushers.” The first chip (Cunningham 25A3C, with reverse text erroneously listed as “One Bull” due to verbal attribution) is 26 mm. in diameter and bears an obverse text of “ALBION MALLEABLE IRON CO.” A small flourish appears on top and bottom, and the rim is composed of fine denticles. The reverse states “ONE BOWL,” with a tri-flourish on top and bottom. The reverse rim is also composed of fine denticles.

The second chip (unlisted in Cunningham) measures 27 mm. in diameter. The obverse design consists of the company logo: the letter “A” within a circle. This chip bears a beaded rim on both sides. The reverse design is identical to the first chip and states “ONE BOWL,” with a tri-flourish on top and bottom. This particular chip however is “medal rotation struck,” a numismatic term meaning the reverse text appears upright when you horizontally turn the token sideways. All other Malleable token designs are “coin rotation struck,” meaning the reverse text appears upright when you turn the token over vertically from the top or bottom.

The third chip (unlisted in Cunningham) also measures 27 mm. in diameter, and the obverse design is identical to the second type. The reverse however does not contain a written text, but instead a large numeral “1” is placed in the center, signifying “One Bowl.” The reverse rim is dotted. By 1937 the wage for “One Bowl” had risen to at least 5¢.

The second group of men who received chips were the pourers who received the molten iron in their individual ladles from the “bowl pushers” and poured it into the sand molds to make a casting. For every ladle that a pourer poured into the mold, he would be given a chip. These chips have monetary values placed on the reverse.

2¢ and 3¢ token obverses. Note: the reverses are too worn to illustrate.

The first chip in this category (Cunningham 25A3A) is crenated with 8-petals. “Crenated” is a numismatic term meaning the planchet is made/cut into rounded scallops. This token measures 25 x 27 mm. The obverse text states “ALBION MALLEABLE IRON CO,” with a “dash-dot-dash” design separating the lines of text. The rim is beaded. The reverse contains a large “2¢” in the center, with the rim being dotted.

As the years passed, wages were increased and pourers were given 5¢ per mold for their work. A second chip design reflects that wage increase (Cunningham 25A3B, erroneously listed as 3¢ denomination due to excessive wear on token). It is round and measures 27 mm. in diameter. The obverse design is identical to the first type. The reverse contains a large “5¢” in the center, with a beaded rim.

Mintage figures or other numismatic details about these chips are unknown. With daily usage however it would be logical to assume that a mintage of one thousand pieces for each design would have been necessary at the time. Regarding rarity, five examples of the type with the large numeral “1” on the reverse are known to have survived in collections today. This particular chip was apparently the last one minted when wages and the value of a bowl increased, and was used just before the automation process began in 1937. The surviving examples of this last type are all known in extremely fine condition signifying little usage, unlike their earlier counterparts which are well worn, signifying years of use. All other chip designs mentioned in this article are considered unique. The rarity can be attributed to the fact that these chips represented wages during the Great Depression when money was scarce, and few workers could afford to have saved these as souvenirs. The Company likewise would have tightly regulated their security due to their monetary value, and would have melted all remaining tokens when the chip system was abandoned after 1937.

Today in downtown Albion there is located the Molder Statue Park, which depicts a molder pouring a molten bowl of iron into a mold. This scene occurred daily at the Albion Malleable Iron Company for many years, and this statue memorializes the many molders of the Albion area. The small aluminum chips used by the workers are a reminder to today’s token collectors and historians of the daily way of life for “bowl pushers” and “pourers” in the 1930s during the Great Depression. 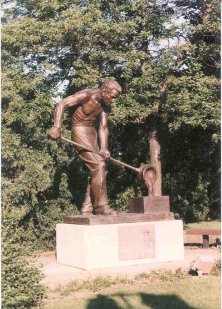 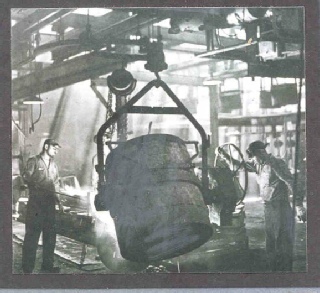