When I began collecting coins at age 13 in 1998, I, like many collectors; started a Lincoln cent collection. My collection was not fancy. It consisted of three blue Whitman folders. The first held all Lincoln cents minted from 1909 - 1940. Folder two held all Lincoln cents from 1941 – 1974. Folder three held Lincoln cents from 1975 – present (1998). While it was a modest collection, I was happy to push new purchases into the holes as fast as possible. Of course other coins caught my attention, and I only filled the third folder completely. All of these coins came from circulation. The pre-1958 coins that I did get were purchased at local coin shows. The key coins such as 1909-S, 1909-S V.D.B., 1914-D, 1924-D, etc. were simply out of reach for my teenage budget.

I decided that Lincoln cents, like Jefferson nickels, Roosevelt Dimes, and Washington quarters were just “too common” for me. Or so I thought. So I set off in other directions, for awhile anyway. To me the rarity of some 1800’s coins, such as three cent pieces, and Civil War tokens seem more worth while. But just like Lincoln cents, these other series had their “road blocks” as well. And even if I could afford a key date three cent piece, they were harder to find than Lincoln cent key dates. This was discouraging. 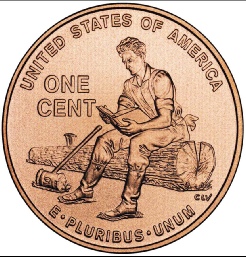 When I first learned of the redesigned 2009 Lincoln cents, I became a little excited. But once the first coin, representing Lincolns’ birth and early childhood was released, the race was on to build a complete set of Lincolns. Sure it would have been nice to buy the keys a few years ago, but better now than next year. I soon found out just how hard some of the “common” issues were to obtain in nice grades. Personally, I think Extra Fine is a nice grade for the 1909 through 1929 cents. Starting with 1930 I am seeking nice, spot-free uncirculated cents. Unlike my first set, this one is housed in a deluxe Dansco album. This type of album allows you to view both the front and back of the coin. Also, after the 1959-D coin there are three unlabeled spots. I used these to display the reverse (back) of a 1958 wheat cent, 1984 (my birth year) Lincoln Memorial cent, and a 2009 Formative Years cent. All three coins are proof examples; therefore they have reflective, mirror-like fields. An interesting note about these three coins is that the 1984 is the only copper plated zinc coin of the three. The 2009 proof and uncirculated sets contain the 1909-1982 copper (also known as bronze) composition.

The only hole in the album that I will not fill is the 1922 “plain” cent. The Dansco album has a place for this coin. This coin was struck from extremely worn dies, which originally struck 1922-D cents. On other coins of this era a coin without a Mintmark was struck at the Philadelphia Mint.

But no cents were struck at the Philadelphia Mint in 1922. In other words this coin is a die variety, not a regular issue like the other coins in the album are. I have decided to place a regular 1922-D cent in place of the 1922 “plain” cent to fill the hole. This is a personal decision. Some collectors may wish to add not only the 1922 “plain”, but also the 1955, 1972, or 1995 doubled die cents to their collections. However you go about it, make your collection unique!

As I mentioned above, and I’m sure many of the readers of this article are aware of, there are four new reverse designs honoring Lincoln’s bicentennial in 2009.These represent the four major stages of Lincoln’s life. The first honors his birth and early childhood in Kentucky. The second honors his formative years

in Indiana. The third honors his lawyer years in Illinois. And the fourth honors his presidential years in Washington D.C. These coins have created a new wave of excitement among collectors. And they have certainly created excitement for Lincoln cents in me! This excitement is what I call Lincoln mania. It has swept the nation, and is spreading with each new design release.

On May 14th the U.S. Mint held a release ceremony for the second 2009 Lincoln cent, in Lincoln City Indiana. This site is where Abe Lincoln, his parents and sister lived from 1816 to 1830. Talk about Lincoln mania! I left at 8:00pm May 13th with a friend. We traveled through the night, and arrived at the Lincoln State park at 3:30am on Thursday May 14th. We were the first ones waiting outside the gates. Once the gates opened we made a run for it and were second in line to buy the Lincoln Formative Years cent. The Mint limited the number of rolls collectors could buy to just 6 ($3). But our early arrival landed us with a write-up, and having our picture in Coin World. There were also several local newspaper reporters there. At one point I commented to my friend that I felt I was in Hollywood because they were all taking pictures of us “early birds” at the same time! Talk about an honor!

If you have never been to a coin release, I strongly suggest you go to one. There will be two more cent releases this year. There will also be quarter and dollar coin releases for the next number of years around the country. And who knows, you might just get mentioned in Coin World or another publication!

The Formative Years design cent is my personal favorite. The image of a young Lincoln sitting on a log reading a book is very powerful. I joked with the family standing behind me in line at the release ceremony that Lincoln was reading a Red book to see what his Lincoln cents are worth. But joking aside, this coin sends a positive message to our youth that education is important.

It seems funny to think that not that long ago I would not consider collecting Lincoln cents, and now I have traveled hundreds of miles to buy the latest one! But that’s the effect Lincoln cents have on you if you let them. And once you do you will not regret it! Let Lincoln mania take over!